Summer is here, and that means warmer weather, longer days, and all the more reason to spend some time on fishing charters in Seattle. While some people are fish experts, others aren’t as well versed in fishing and the differences between each subspecies. Many people know that Seattle is an abode for salmon, but fewer know how to tell whether the salmon you caught is a Chum, Chinook, or Sockeye. Whether you’re an expert fisherman or casting a rod for the first time, here are the five different types of salmon you may find while fishing in the Puget Sound waters. 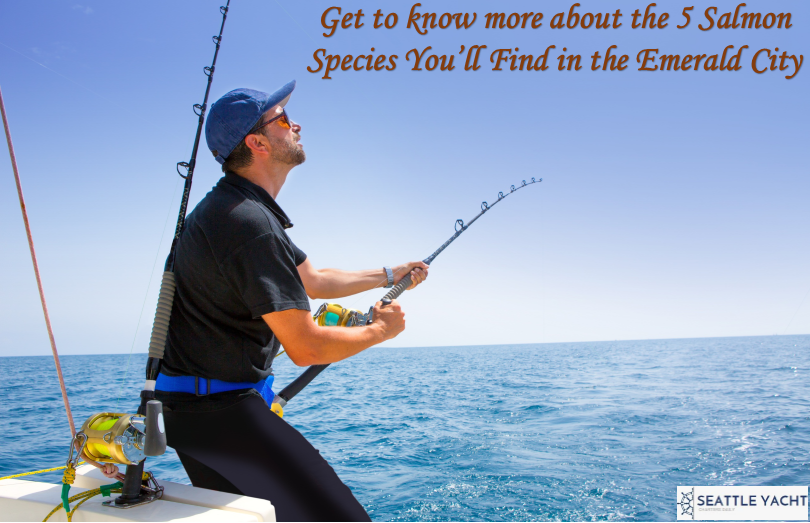 CHINOOK SALMON – Chinook Salmon also known as King Salmon are typically dark silver in color with blue or green accents. Their typical weight ranges between five and 30 pounds, but they’ve been recorded to way up to 120 pounds. This fish variety is known for its large size and is the largest salmon species. They are considered to be mature when they are three, four or five years old. Adult Chinooks migrate from the ocean up into streams to spawn. It is said that these species do this ritual once in their lives, and then die. They are most commonly found in Washington, Oregon, Alaska, Idaho, Northern California, and Western Canada.

CHUM SALMON – Chum salmon, sometimes known as Dog salmon are among the most abundant species in Washington. Chum species are characterized by their black and silver coloring and smaller size, typically between eight and 15 pounds. Though sometimes this species of salmon gets a bad reputation for its thicker texture, there are many great recipes for chum salmon and it’s always a good choice for smoked salmon. Since most chum salmon spawns near river mouths, they have lower oil content than sockeye, Chinook, or coho. Chum salmon has a mild taste, is low in sodium, and is a good source of omega-3 fatty acids, niacin, vitamin B12, and selenium.

COHO SALMON – Coho or Silver salmon have similar coloring to Chinook salmon but are smaller in size with an average mature weight around six to fifteen pounds. You can also tell the difference between the two by their jaw characteristics, as Coho salmon have lighter coloring around their jawline. Coho is a popular sports fish of the Puget Sound. These species use coastal streams and tributaries and they are often present in small neighborhood streams. They can also be spotted in urban settings if there is a perfect amalgamation of cold and clean water. Coho also spawns in small coastal streams and the tributaries of larger rivers.

PINK SALMON – Pink or Humpy salmon are smaller than their cousins, typically weighing under five pounds and measuring two feet in length. They are only in Puget Sound every other year during odd numbered years. These fish are silver without dark markings. This salmon is mild-flavored, softer than most salmon, has a small flake and contains a relatively low amount of oil. However, their coloring typically becomes darker during spawning season. They are also known as Humpy salmon because male salmon develop a hump on their backs when they reach the area where they will spawn.

SOCKEYE SALMON – Sockeye salmon, also called Red Salmon and Blueback salmon typically have dark blue backs with silver sides and turn bright red while they are spawning. The more intense flavor of Red Salmon, for instance, makes it ideal for dishes containing other highly flavored ingredients, such as olives. Sockeye is the most flavorful Pacific salmon. In Washington, sockeye can be spotted in Lake Washington, Baker Lake, Ozette Lake, Quinault Lake, and Lake Wenatchee. Sockeye are unique in that they require a lake to rear in as fry, so the river they choose to spawn in must have a lake in the system.

Whether you’re an experienced fisherman or new to the sport, the Emerald City has a lot to offer when it comes to salmon fishing. If you’re interested in trying your hand at salmon fishing on board a private fishing charter in Seattle or want to learn more about salmon in this area, get in touch with Seattle Yacht Charters Daily today!

View all posts by: admin